“ၿမန္မာနဳိင္ငံအတြင္း၌ ဘဂၤလားေဒရွ္နဳိင္ငံသား ရခုိင္လူမ်ဳိး(၅)သိန္းေက်ာ္ ခုိး၀င္ေနထုိင္ၿခင္းစာတမ္း”
To:
His Excellency Mr. Ban Ki-moon,
Secretary General
United Nations
Dated:          :August 22, 2012
Subject: The formation of commission is with full of bias and its finding would be overall bogus.
Your Excellency,
In connection to the formation of investigation commission formed by the President Thein Sein to expose the real cause of the incident and to give suggestion for national interest date on 17th August, 2012 is simply a showoff in the sight of domestic, regional and international community to ‘cover real nightmare let happened in Rakhine state’ and at the same to buy time to coil the United Nation General Assembly to be held in next September.

President Thein Sein has first set by 17th September to be submitted the finding directly to the president but later he changed his mind the investigation report is to be submitted by 16 November, 2012. Being honestly the first submission time-frame to the president by the formed commission been before the September UN General Assembly in which Mr. Thomas Ojea Quintana has to be submitted details about his mission, recently surveyed along Rakhine state—president Thein Sein’s Union government and its Rakhine state government have realized that they didn’t have enough time to redesign newly created one for the real terrifying which was let happened in Rakhine state to show the international community.

We Rohingya community inside and outside the country have firmly believed that only international community which comprised international human rights activists, historians, intellectuals, intelligentsias, philanthropists, journalists, geographers, language experts, lawyers, experts in criminal investigation would only have the best suited to involve and participate with recently formed investigation commission by president Thein Sein to expose the real cause of the incident which particularly devastating largely social affairs of Rohingya.

Unfortunately, the commission in which comprised some extreme hard-line Rakhine Nationalists who have clearly been participated to incite the one sided riots and their open interviewing with several Burmese programs of oversea to expel Rohingya, to make aliens Rohingya, to make separation between two communities like Israel, to annihilate Rohingya-- the so called 88 generation leader who has been blatantly denying the true facts of Rohingyas’ existence without knowing any real background of Rohingyas history and branding us as just immigrants from adjacent Bangladesh soon he had visited in Rakhine state recently-- the fabricated news makers who had been in line principal of Rakhine chauvinists, whom the president Thein Sein indirectly quoted in his interview with VOA/Burmese program --- the Bishops, Islamic organizations and Hindu religious organization which are under the bond of government not to involve in politics in line principle of organization---some leaders of political parties who never ever talked and suggested to stop the violence rather fanned the flames via journals and talk shows ---- as long as the absence of international community and our own Rohingyas who concerned in this affairs as stakeholder, we Rohingyas feel that such kind of unilateral inquiring commission in the real field would not on the go to extract the true grounds of violence between Rakhine and Rohingya but would make worse by complicating, fabricating, deviating, twisting, diverging, confusing and at last this would make prolonging and buying time to be settling this hot issue which concerned day in day out the miserable life of Rohingya along Rakhine state once and for all.

To be blasting this clandestine joint plan starting by Ma Thida Htwe from Rambray to Taungup, Maungdaw to Sittwe, Buthidaung, Rathedaung, Kyauktaw, Kyauknimaw and so on---there have been synchronized voice and action of people of all Rakhine mass and class to annihilate or at least to push into harshest trouble to face in this rainy season such as to escape Rakhine hooligans’ intimidation, mass killing and burning --- into rivers, seas, mountain pass, scarcity of food, blockade of food and foodstuff, settling in concentrated camps all Rohingyas people by one way or another so as to die by malnutrition, food scarcity, affecting diarrhea, inefficient sanitary, other infectious deadly diseases and so on --- where there are Muslims Rohingya all along Rakhine state.

Honestly, to find out easily the culprits all along the past maneuver, it has been very simple to point out without exaggerating ---- the words broadcasted via all Burmese programs of oversea radios and television channels before and after the violence plus the routinely issuances of local journals inside Myanmar until now would have been strong evidences that the Rakhine Nationalities Democratic Party headed by Veterinary Dr. Aye Maung --- U Aye Tha Aung, chairman of Rakhine League of Democracy --- the Paccima Zone Magazine which was issued on February 2012 by Rakhine-thar-gyi Sarpay by the permission record no. 5301201211 under the order of Ministry of information --- are crystal clear culprits of this communal master planners to cause communal conflict that undermines peace and stability, causalities, very deep misunderstanding among people to trust one another, for social building, property losses and other damages due to clashes. Seeing this with open eyes, the investigation commission formed by President would be very ridiculous as a perpetrator would not find out a perpetrator in the session of investigation --- a killer would not responsibly arrest the killer in the search out—a sinner would not point out a sinner in a court and so on.

Who can deny that the persons who are shown up in the Paccima Zone Magazine aren’t responsible and accountable of the articles prescribed bravely which have been generally obstruction and suggested to make so called Rohingya in Rakhine state as guest people or slave in that each and every article --- and much more way of authors feeling have been shown to annihilate Rohingyas in the land -- all the readers are being urged to use derogatory terms as Rohingya downtrodden----- these prescriptions are the main master plan to cause the last communal clashes which made Rohingya desolation in the sight of international community. The coordinated people whom shown in the Paccima Zone Magazine who held respective government offices in Rakhine state have been different department ranging from Buddhist Monks, township administrative officers and police officers who are responsible in the last riots, arson, extra-judicial killing, rape, looting, blockage of food and foodstuff, extorting money, shooting innocent people under the cover of 144 order, mass arrest in fasting month in mosques alleging them gathering more than 5 people and thus violating the President emergency order, travel restriction from one township to another, sending innocent people to the jail after prosecuting false accusation without proper trial in the court, forcefully entering into the houses, arresting and shooting people in townships such as Maungdaw, Buthidaung, Rathedaung, Kyauktaw, MraukOo, Punnagyun and MinBya without any reason, taking away the dead bodies and buried as per their arrangement---- all in all there are no rule of law in Rakhine state for Rohingyas and these all have been because of RNDP party, ALD and due to the legal Rakhine intellectuals incitement of the Paccima Zone Magazine—to show the responsible persons from that Magazine are ---U Aung Myint Soe, district administrator,MaungDawdistrict— Monk-AshinSeikinda (Natmyit SanAung),consultant—Monk-Ashinzayandabawdi (PanAung), consultant ---- Monk Ashineindarsariya (ArdinAungMyay) consultant--- Monk-Ashinkawthala (kawthala Gawaythi) consultant --- Monk –AshinKuthala (Thandwe) consultant --- U Myo Win (district police officer,Maungdaw)--- Kyaw Thi (district project Manager, Maungdaw) --- U Aung Kyaw Oo, Township administrator, Buthidaung township --- U Aung Thar Win, police officer, Buthidaung township --- U SoeNaing, township project officer, Buthidaung --- these people have been extremely Rohingya people’ blood exploiters and main perpetrators with RNDP party and ALD party to spoil the normal situation into boiling environment.

Sir, as a matter of fact, the investigation commission should be formed, to extract real information in the victimized ground, through by the group of respected persons who should be flawless, honest and benevolently coordinated persons for a good contemplation as supposed by President Thein Sein----- but right now we, vulnerable and the most persecuted people, as prescribed by the United Nations, believe that the formed investigation commission will only work for Rakhine people who have attacked, burned, undermined and sent to hell-camp and they have more master plans to attack, to weaken, annihilate and at last push entire Rohingya people into hell in a cell in future. In this regards, though international community has welcomed the formation of investigation commission by president and its result, entire world would not be perceived by fabricated presentation of the formed commission to accept the mission’s deceitful finding while in the mission some of the members are widely believed to have been involved and committed crime against humanity by one way or another in violence from beginning to the end. Please accept my suggestion.

Sincerely Yours,
Mahan Min Khant
(Researcher)
Note: (1) please find the Paccima Zone Magazine’s cover, and its board of director who incite the riots in attached files.
Note: (2) please find the attach file of the members of formed investigation commission 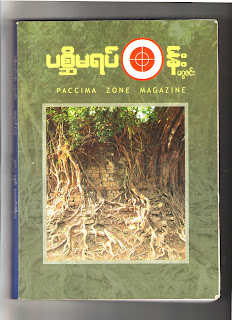 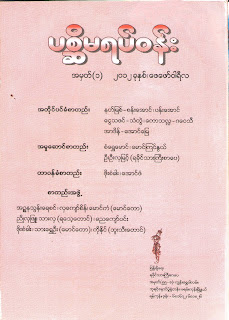 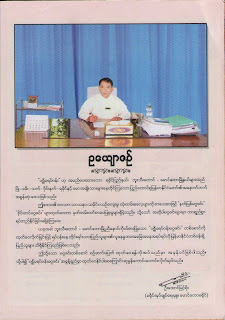 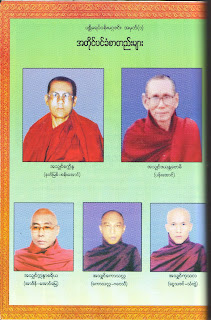 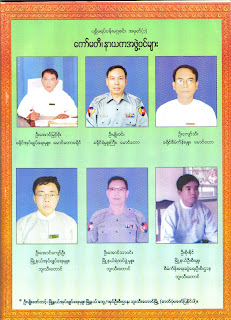 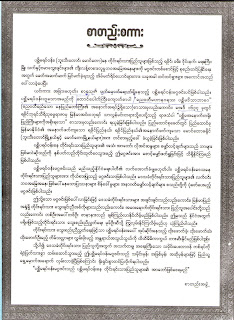 The chart of Investigation Commission formed by President Thein Sein

Posted by arakanmuslim at 10:05 PM