ARNO President interview on recent situation of Rohingya and Burma


Mr. Nurul Islam, the president of Arakan Rohingya National Organization (ARNO) based in London who had given an interview on recent situation of Rohingya after Thein Sein’s new government’s reform process towards the democracy.

KPN: The Thein Sein’s new government held meetings with ethnic groups such as - Karen, Mon. Rakhine, Shan, Chin and Kachin--etc, but the government excludes the Rohingya community. Regarding this, what is your opinion?

ARNO: The exclusion of Rohingyas asserts that U Thein Sein government has no change of attitude towards them. It is still pursuing policies of exclusion, discrimination and persecution against Rohingyas. We remind the government that Rohingyas are an integral part of the Burma’s society regardless of their appearance, ethnicity and religion.

KPN: The Rakhine community has been campaigning against the Rohingya community inside Burma and abroad. Do you think that there will be any solution between the two communities, why?

ARNO: Rakhines are our immediate compatriots and they are our brothers. We had lived in Arakan peacefully in share and share alike. Still we are living in the same place drinking the same water and breathing the same air; not only so but we have to live together until the end of the world. Arakan is our own whereas Burma is for all of us. Together we can achieve much. We should take lesson from the history. It is futile exercise to preach and promote hostility against Rohingyas. Extremism, xenophobia and confrontation will not be of assistance to Rakhine people. It is time not to dispute but to work in unison with full understanding which will lead our children to a state of extreme happiness. Based on ‘Arakan reality’ peaceful coexistence between our two sister communities is the only solution. It is very much possible. They only thing we all need is ‘will to do’.

KPN: There are some changes in Burma after the new government, but no policy is changed over the Rohingya people and the persecutions against the Rohingya community is going on bad to worst day by day. Regarding this, what is your comment?

ARNO: Yes, there are some positive changes in Burma. But so far no wind of change has touched the Rohingya people. It means that good sense does not prevail yet in the minds of the authorities. Nowadays the Rohingyas have to experience series of racist and xenophobic activities of the government and non-state extremists. They are not treated as citizens and the persecution against them callous. End to persecution and discrimination against Rohingya is a yardstick for judging how far U Thein Sein government is sincere towards restoration of democracy and promotion of human rights in Burma. The government must genuinely accommodate ethnic Rohingya in country’s democratic and political process as one of the members of the family of the Union of Burma. A peaceful negotiated settlement of the Rohingya issue and problem is most urgent in the interest of peace and democracy in Burma.

KPN: Regarding all the above situations, especially for the Rohingya community, what are your future plans and programs and what do you want to say to the present government, NLD and the international community?

ARNO: The primary factor that has led the Rohingyas to suffer grave human rights violations or crimes against humanity in Burma is their religion and ethnicity. Arbitrary deprivation of Rohingyas’ citizenship, rendering them stateless in their own homeland, is an international crime. We will continue our just struggle for freedom from servitude and oppression. We will work in solidarity with country’s democratic forces. We will explore all available national and international avenues for the restitution of our inalienable rights and freedom.

We wish to be responsible citizens of the country and urge upon the government to treat Rohingyas justly and reasonably well. It requires to genuinely accommodating Rohingyas as one of the many ethnic nationalities of the Union of Burma and treating them equals in Arakan. It is urgent that the repressive 1982 Burma citizenship Law in particular, which violates several fundamental principles of customary international law standards, must be amended in conformity with the generally accepted citizenship practices and provisions of international law. Rohingya should be legitimately allowed to be a part of the on-going political and democratic process, and their citizenship rights and ethnic rights have to be guaranteed on par with other ethnic groups of the country.

We have high expectation of Daw Aung San Suu Kyi. But she has been, so far, surprisingly silent on the Rohingya issue, a problem of serious human rights violations in the country. As a democratic icon we urge upon her to speak out for the voiceless Rohingyas on democratic principle and universalism of human rights.

Meanwhile, we call on the International community, UN, OIC, EU, ASEAN, UK, and Burma’s neighbours to put pressure on the ruling Burmese government to stop forthwith persecution against Rohingya and to grant their citizenship and ethnic rights. We also urge upon them to provide them with ‘international protection’ in the absence of ‘national protection’.

KPN: What is your opinion about the participation of NLD parliament members in recently held parliament in Naypidaw, in Burma?

ARNO: It is a development in Burma politics that Daw Aung San Suu Kyi and NLD MPs are participating in Parliament Naypyidaw, although they are likely to face a difficult future to being about a complete change towards democratic reform.
KNP
Posted in: Refugee News
Rohingya Blogger
Posted by arakanmuslim at 12:31 AM 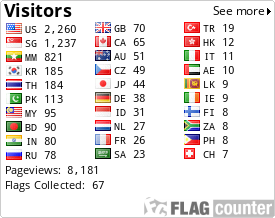