Chittagong, Bangladesh: The Bangladesh Foreign Minister Dipu Moni in her statement highlighted the issue of Burmese refugees- Rohingya refugee- being hosted in Bangladesh for the last two decades and put forward some concrete proposals to address the issues in the First International Ministerial Conference on Refugees in the Organization of the Islamic Cooperation (OIC) – the Muslim World- began in Ashgabat, Turkmenistan on May 12, according to a press release from the ministry. 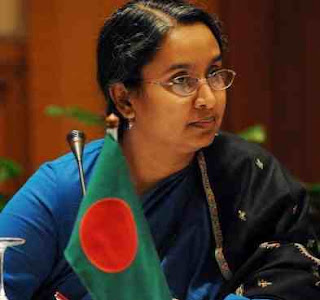 “The proposals include the requirement of international dialogue and engagement with non-OIC countries; addressing the root causes of protracted refugee situation; and strengthening the principle of international burden-sharing — considering the shrinking global space for asylum and a growing trend of asylum fatigue.”
The Foregin Minister also mentioned that the refugee problem imposes disproportionately heavy burden on host countries, who generally belong to the under developed country category or least developed countries (LDCs) like Bangladesh.

The foreign minister underscored engaging the host countries in decision-making and gap analysis relating to refugee protection, and stressed that their financial and associated economic contributions should be accounted for in the “official” discourse on protection.

Urging the UNHCR to take the lead role, Dipu Moni opined that the OIC could be a political partner in that dialogue.

Foreign Minister Dipu Moni May 13, urged the United Nations High Commissioner for Refugees (UNHCR) António Guterres to resume repatriation process of the Burmese refugees in Bangladesh on the sidelines of the Organisation of the Islamic Cooperation (OIC) Ministerial Meeting at Ashgabat, Turkmenistan, the press released said.

But, the Guterres opined that there might be some differences in understanding between the UNHCR and the government of the countries concerned about different aspects of Rohingya refugee problem.

“To clarify the issues, the Bangladesh government may consider sending a team to Geneva or the UNHCR may send a team to Dhaka,” Guterres said.

Dipu Moni preferred a latter option and requested the UN refugee agency chief to adequately sensitize the UNHCR Dhaka office to take necessary measures to resume the repatriation process that has been stalled since 2005.

The two-day meeting is the first of its kind under the aegis of the OIC (Organization of Islamic Cooperation) where UN High Commissioner for Refugees (UNHCR) is one of the co-organizers according to a press release from the ministry.

Similarly, Department of International Relation of Chittagong University (CU) organized a two-day lectur session in collaboration with the United Nations High Commissioner for Refugees (UNHCR) sub-office in Chittagong to give the students a practical knowledge about the Rohingya refugees and their miserable condition, Chittagong University (CU) on May 12, according to CU Department of International Relation’s statement.

Dirk Hebecker, head of UNHCR sub-office in Cox’s Bazaar, was the key lecturer on the first day of the programme and explained about the origins of the Rohingya refugees of Bangladesh, their problems and challenges.

Posted by arakanmuslim at 12:05 AM